An annotation jamboree happened in the first week of November. Curators annotated two papers on yeast transcription, to coincide with the improvements to the transcription part of the ontology, and the annotations were collated for comparison. A call-based discussion happened on 8th November.

The minutes of the jamboree are here.

A new monthly annotation call was initiated. The intended purpose is to include all curators within the GO Consortium to discuss issues that are suggested by the curators themselves. Suggested topics are placed on the GO wiki. The first call discussed the improvements to the transcription part of the ontology. Subsequent topics have been;

Future topics will include;

The GO Consortium's Reference Genomes project now provide gene association files of annotations propagated between orthologous species, based on the PANTHER family data. The Annotation Advocacy and Coordination group have been assisting annotation groups in incorporating these annotation files into their databases.

Gene Association Files have been provided by the GO Consortium which contain annotations inferred from pre-existing experimentally evidenced GO annotations using the Molecular Function-Biological Process links present in GO. Annotating groups have been encouraged to incorporate these annotations into their own files.

The files of inferred annotations are here

GO Camp A GO Annotation Camp was organised for June in Geneva. Prior to the Camp working groups were formed for those areas where the Consortium needed to focus their efforts for improvement to annotation guidelines. The working groups defined the problems that needed to be addressed and met regularly by conference call to produce guidelines and quality control checks that would be presented for approval at the GO Camp. The seven working groups were;

Links to slides and discussions can be viewed here

A call focusing on the transcription overhaul happened on 17th September. The slide presentation is here

A call focusing on the changes to the signaling part of the ontology happened on 18th October. The minutes are here

We are working on cleaning up the existing documentation and adding new guidelines to the GOC website.

The aim of the Annotation Extension column is to allow curators to provide additional information within a single annotation. This information could take the form of gene products, GO IDs or terms from other OBO ontologies.

Since there is the possiblity of adding disparate sources of information in this column there is potential for confusion over the proper use of the column. It has therefore been decided to populate the Annotation Extension column incrementally to ensure that documentation is complete for each data type before it is incorporated into the GOC database.

The first data type to be included is cell type data using identifiers from the Cell Type Ontology.

A number of new quality control checks have been put in place. There are two types of check;

Statistics for the past year

A total of 471 queries have been answered between 01 Jan and 20 December 2010. All queries were answered within 30 hours, apart from the December holiday period - when there was a lag of 5 days.

Most of the emails were about 'how to do something' (download a file, find annotations for a species, how to cluster genes from an micro array experiment, GO slims).

Another highlight is there were at least 2-3 emails on downloading/getting access to annotations for human genes. 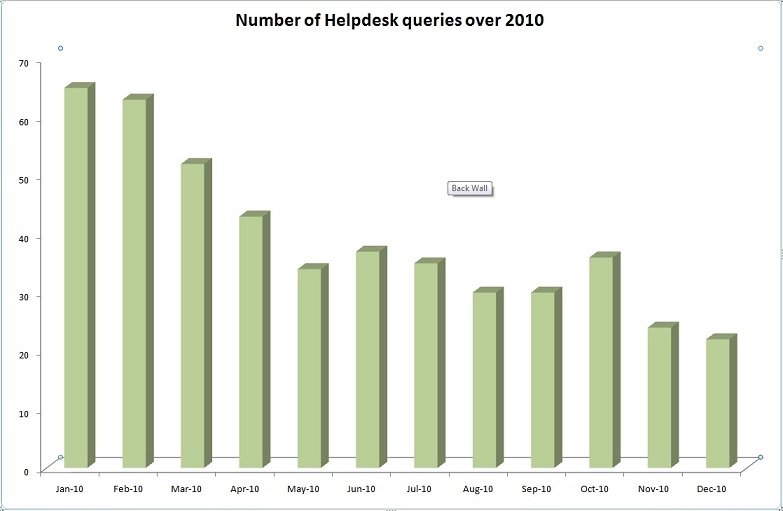 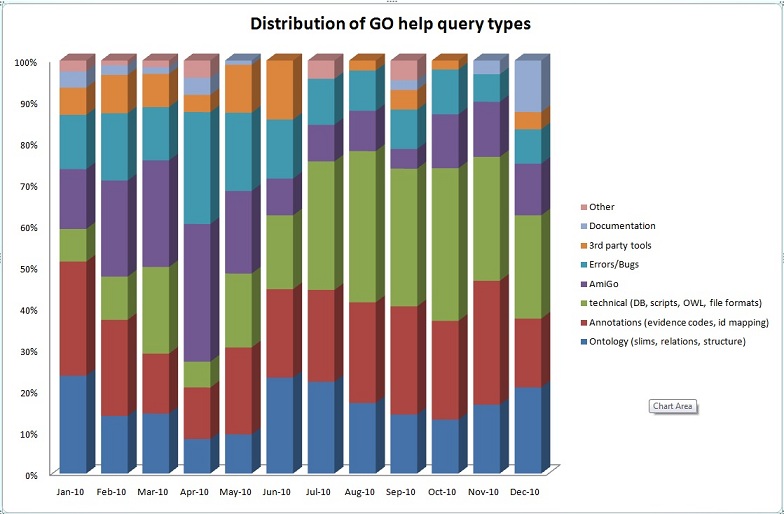 The GO Consortium was hosting several mailing lists, many of which were dedicated to a particular area of biology or annotation and many were not actively in use. The decision was made to merge these lists into one 'GO-discuss' list. Subscribers are strongly encouraged to use the subject line effectively to indicate the subject being discussed. This will allow subscribers to read/scan or ignore a posting. The topic being discussed should be mentioned within square brackets in the subject line. For example issues related to:

The use of a single email list has allowed the GOC to keep everyone informed of GOC's annotation practice and guidelines and will continue to give all subscribers an opportunity to see what sort of annotation topics/issues are being discussed.

The Gene Association File format was updated to version 2.0 on the 1st June. The Annotation Advocacy and Coordination group have been involved in discussions on the file format and encouraging all annotating groups to provide their files in the new format.

Documentation on the GAF2.0 file format

Michelle Gwinn-Giglio and Marcus Chibucos have sent the first proposal for the large-scale changes to the Evidence Code Ontology to the GO-discuss email list. A second proposal, that incorporates comments received from the first, is due out before the end of 2010.

In the upcoming year we will;