The UniProt GO Annotation project (UniProt-GOA) at the European Bioinformatics Institute has been a member of the GO Consortium since 2001. All UniProt curators are actively involved in curating UniProtKB entries with Gene Ontology terms during the UniProt literature curation process, providing both high-quality manual GO annotations in addition to their contributions to electronic GO annotation pipelines. The multi-species nature of UniProtKB means that the GO Annotation project is able to assist in the GO curation of proteins from over 430,000 taxonomic groups.

The core UniProt-GOA project staff are primarily responsible for supplying the GO Consortium with manual and electronic GO annotations to the human proteome. UniProt-GOA staff not only manually annotate, but coordinate and check the integration of GO annotations from other curation efforts at the EBI (including from InterPro, IntAct and Reactome). The UniProt-GOA dataset is supplemented with manual annotations from 35 annotating groups, including all members of the GO Consortium, as well as a number of external groups which produce relevant functional data. Nine electronic annotation pipelines are incorporated into the UniProt-GOA dataset, which provide the vast majority of annotations for non-model organism species. UniProt-GOA is therefore able to consolidate multiple sources of specialised knowledge, ensuring the UniProt-GOA resource remains a key up-to-date reference for a large number of research communities.

Between January 2013 and November 2013, the UniProt-GOA project provided the GO Consortium with 11 annotation file releases, including non-redundant sets of GO annotations to 13 specific proteomes, as well as data releases for annotations of all proteins in UniProtKB. 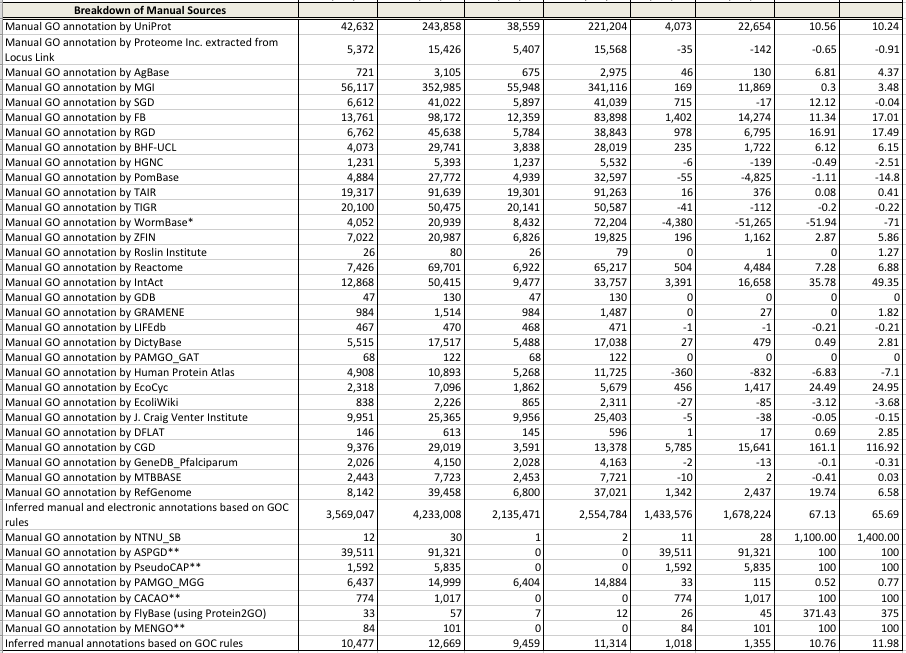 **New sources of annotation after January 2013

During 2013 we started a curation project to annotate proteins that are experimentally determined to be located in the extracellular vesicular exosome (A membrane-bounded vesicle that is released into the extracellular region by fusion of the limiting endosomal membrane of a multivesicular body with the plasma membrane). The composition of exosomes can vary depending on the cell type they were released from, this information can be captured in the annotation extension to provide valuable contextual information for each protein.

We have also been involved in recuration of annotations for apoptosis and necroptosis following the ontology development projects in these areas. This involved reviewing annotations to high-level apoptosis terms and re-reading publications to determine if a more granular term could be used instead.

Finally we are annotating a list of approximately 400 human proteins that are targets of the Critical Assessment of Functional Annotation (CAFA) competition. We are curating the primary functions and processes of these proteins in order to populate these targets with functional annotations, which will assist in the assessment of the CAFA competition.

Work to improve the QuickGO user interface has continued throughout 2013. QuickGO will retain all of its current functionality but is designed to be more intuitive to use.

As more GO Consortium curation groups migrate their annotations into the UniProt database and move to using Protein2GO as their sole curation tool for protein GO annotation, we have been adding features to assist these groups in searching for MOD identifiers they are more familiar with. Protein2GO can now be used to search for specific MOD IDs and return the equivalent UniProt accession(s). An indication is given as to whether the UniProt accession is reviewed or unreviewed. Curators from other MODs are also able to put MOD identifiers into the 'with' field.

Another addition was a Literature Search link that allows GO curators to perform keyword searches on nine different Textpresso corpora from within Protein2GO.

As GO curation guidelines evolve, we continue to add quality control checks into Protein2GO to prevent incorrect annotations from being created. These include;

Other features implemented include;

In our 125th release of the multispecies UniProt file, we supplied over 200 million annotations to over 30 million proteins from all our collaborating groups.

Manual annotations are now being integrated into our files for several bacterial and viral species as provided by the Community Assessment of Community Annotation with Ontologies (CACAO), a project to provide large-scale manual community annotation of gene function using the Gene Ontology. Details of the CACAO project can be found at: http://gowiki.tamu.edu/wiki/index.php/Category:CACAO

The CACAO annotations can be viewed in QuickGO: http://www.ebi.ac.uk/QuickGO/GAnnotation?source=CACAO

We now release a set of species-specific annotation files that are based on UniProt reference proteomes that provide one protein per gene. The protein accessions included in these files are the protein sequences annotated in Swiss-Prot or the longest TrEMBL transcript if there is no Swiss-Prot record.

The files are released in both GAF2.0 and GPAD format and there is an accompanying Gene Product Information file, which contains additional information on all the protein accessions in the species' reference proteome.

We now supply the species-specific annotation files in GPAD1.1 format.

Manual annotations are now being integrated into our files, for archaeal and bacterial species, that have been supplied by the Microbial ENergy processes Gene Ontology Project (MENGO). Details of the MENGO project can be found at: http://mengo.vbi.vt.edu/

We now supply the UniProt annotation file in GPAD1.1 format.