WHAT NEEDS TO BE DONE / BACKGROUND

Intracellular signal transduction needs some attention but this is a good case-study for the LEGO model.

The most recent (November 2013) proposal for intracellular signaling is to have signaling modules which require 2 OR MORE DEFINED COMPONENTS. E.g. PI3K-AKT signaling module. These module terms would be in addition to general 'PI3K signaling' and 'AKT signaling' terms. For more details on this proposal see [2]. A mock-up of how the modules could look is shown below 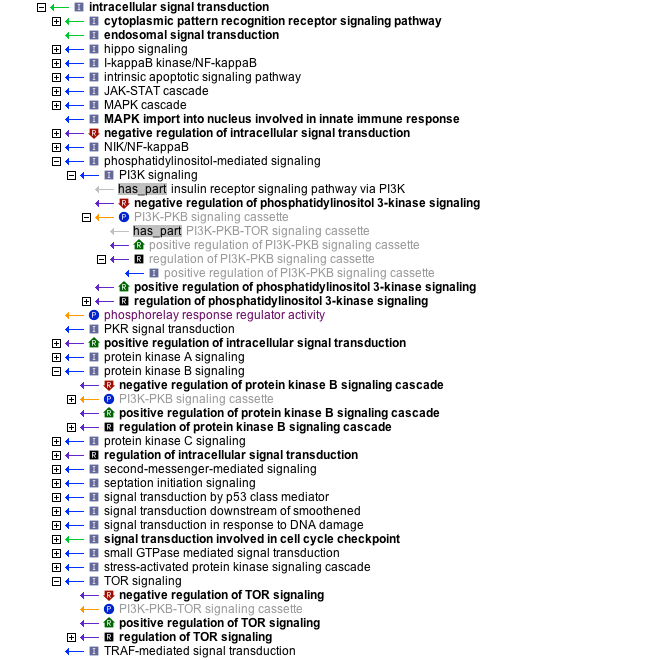 Becky emailed this proposal to Mike T, Andrew W. and Andrew C-A. Andrew C-A responded but wasn't sure the solution would fix the confusion.

For the problems of connecting the intracellular signaling cascades with the cell surface receptors above them, see slide 32 of the overview from the LA GOC meeting, May 2011.

Intracellular Signaling: Where does it start and stop?

Intracellular signaling units can be split into those that are a group of proteins:

and those that are really just one mediator/protein:

For those that are just one mediator, it's harder to define a start and stop point. Where, for example, does PI3K signal transduction begin and end?

The cascades were discussed at the call on 25th November 2013: [4]. On this call it was suggested that:

-PI3K signaling would refer to any intracellular signal transduction that goes VIA PI3K. E.g. events above and below PI3K -We would create signaling cassettes consisting of at least 2 signaling components, and define a start and stop for these cassettes. E.g. PI3K-AKT-TOR cassette.

Becky emailed this proposal to Prof. Mike Tyers, Andrew Winter and Andrew Chatyr-Aryamontri. We need to make sure this we could still capture a GP that regulates e.g. PKB activity.