because 'DNA demethylation' (and 'DNA methylation') is_a 'regulation of gene expression, epigenetic'. Should it be part_of instead?

The list in yesterday's assert report (email "[go-ontology] build-go-assert-inferences - Build # 173 - Fixed!") is really long, 402 added axioms presumably as a result of the synapse branch merge. Has anyone had a chance to review them all? 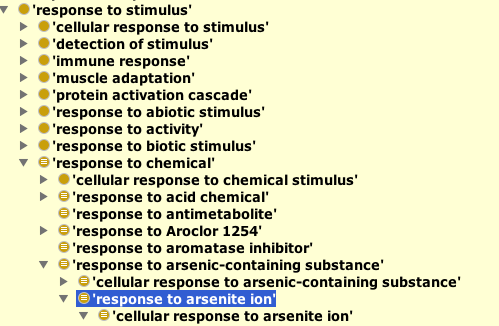 This equivalence axioms takes care of the correct classification of 'response to arsenite ion' under 'response to chemical':

We don't yet have axiomatisation to deal with the 'cellular bit' - hence the more specific genus in this case. But if we agree that all cellular response occurs in some cell we could have:

The reasoner would then look after classification completely.

See this document that DOS put together: https://docs.google.com/document/d/1mLuIbLGo9MApOVBeELzqaalKDcLG0xZthWnporGVkCg/edit?usp=sharing

https://github.com/geneontology/go-ontology/issues/9189 which brings up issues with 'establishment of localization' and 'transport'

DOS' work in this area should clear up that issue as well.