Plan for changes to be made. Preferably able to be completed and made live before March 1st 2009.

We discussed how best to do some really concrete work that can be committed before next March, that will pave the way for future work, but without requiring super-human effort to finish in time.

We all agreed that we have been circling round the same problems with the top terms for some time now. Peter suggested that we should each take a pathway that we are very familiar with and try to put the terms in around the new structure that we have created. Everybody agrees that this is a good idea. It will test the structure we have already, and if we can get some pathways right then they will serve as good examples to be followed in future editing by others.

Everybody is able to to use OBO-Edit at least for browsing the file. Jennifer will send the link to the file and people can either edit the file directly in OBO-Edit or put their new structure up on this wiki page.

Jennifer will also make a doodle poll to set up a meeting for three weeks from now, to discuss what we have done.

If you are going to edit the file in OBO-Edit, please could you note down the cvs version number of the file that you started with, as this will be required for merging the changes in again.

This is the place to go to get OBO-Edit: https://sourceforge.net/projects/geneontology/files/

If you would like to make new terms you will need to set up a new number range. It will be best to number terms from 1-999 and have a prefix corresponding to your initials, so for example my first term would be JID:0000001.

We decided to work on the dopamine pathway during this meeting.

Action: Jen to write to Erika Feltrin and ask if she has time to look over what we have done. (DONE - no response yet)

We took the parts of the dopamine pathway in chronological order and slotted the various processes in.

We noted that the structure above could be most correctly set up with reference to ChEBI.

Questions: Each pathway may have many many different effects, and each of these could be counted as a type of "conclusion of signal transduction". Should we even by trying to capture these as termination steps? Will it lead to a massive explosion in the graph?

We discussed whether this is correct:

and how we might connect the child term to adenylate cyclase activity and to the effects further downstream. We were not clear on whether the term should be connected to the dopamine signaling at all. We considered asking the GO list for feedback.

There was a general feeling that users should be able to trace the process through from signal to effect using the ontology (or ontologies). However we were not sure of the downstream effects of dopamine, which made it difficult to determine how to do this. To deal with this we switched topic to T cells, since Sandra was present and knows T cell signaling in great detail.

We started to make terms for T cell signaling, but then realised that it might make more sense for the editing work to be done during the week with only Jennifer and Sandra present. This will be done before next week so we can look at the effects of T cell signaling then with everybody present to discuss it.

Sandra Orchard has expert knowledge of T cell signaling so we worked on making terms to describe this pathway.

Here are the edits we made:

We made a new term "signal transmission via an intracellular cascade" and put pre-existing "protein kinase cascade" underneath. 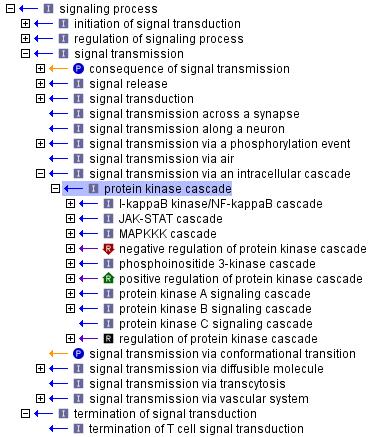 We made a new term "signal transmission via a phosphorylation event" plus cis- and trans- children.

Under "MAPKKK cascade" the existing terms are muddling terminology and we should be using human genome nomenclature. e.g. instead of JNK we should use MAPK8, MAPK9, MAPK10. The Human Genome group do not use the MAPKKK terminology either, they use MEK instead of MAPKKK. We need to standardise to their system. Jennifer gave Sandra a list of the names of terms that are descendents of MAPKKK and she will list the correct names to be edited in. (For list, see below)

The changes will best be seen by looking at the file (version 1.18), which is at:

To see the exact edits in a colored diff see:

"activation of dopamine receptor signaling pathway" needs a very precise definition because there are different kinds of dopamine receptor. One family is excitatory and one is inhibitory, and both are coupled to G-protein. One binds G-protein alpha s and one binds G-protein alpha i. This is shown in Reactome. There are two reactions for each binding event. See REACT 17033.1 (excitatory) and REACT 16959.1 (inhibitory).

Explanation of the process:

Dopamine crosses the synapse and binds the dopamine receptor. Then the receptor is coupled with G-proteins. Next G-protein kicks off the signaling pathway inside the cell. There are several different signals. The signals convert ATP to cAMP. cAMP activates kinases, and then there are other changes in the channels that allow movement of neurotransmitters in the cell.

Look also in ChEBI (CHEBI:18243) and ask the reactome people for their advice.

Erika was not able to fill us in on what happens further downstream from dopamine, though she thought that people at GlaxoSmithCline would know. She is no longer active on this project so could not liaise between GO and GSK on it.