General points about viruses in GO

There are a lot of processes that look, on the face of it, as though they should be specific to cellular organisms, but then they turn out also to be carried out by viruses inside of the cellular organisms. This is an interesting point to note for ontology development. Should we be using the same terms for:

a) the process that is normal for a cellular organism to carry out in its own cell.
b) the same process carried out by a virus that has invaded a host cell.

'Cellular' terms in GO - the converse of the above situation

Since we introduced the term 'cellular process' we have also started to make terms called 'cellular x', for example in the example below we will make the term 'cellular methylation'. This creation of parallel 'cellular x' and 'x' terms enables the natural process as carried out by a cellular organism to be annotator to the 'cellular x' term, while the same process as carried out by an invading virus in the host cell can be annotated to the non-cellular 'x' term. Is this the correct way to proceed? It involved a sort of duplication of a number of terms, though it does allow us to clearly distinguish between the host and viral processes.

Do the descendents with no 'cellular' at the beginning of the name trump the 'cellular' ancestor or vice versa, and what do we do about it? 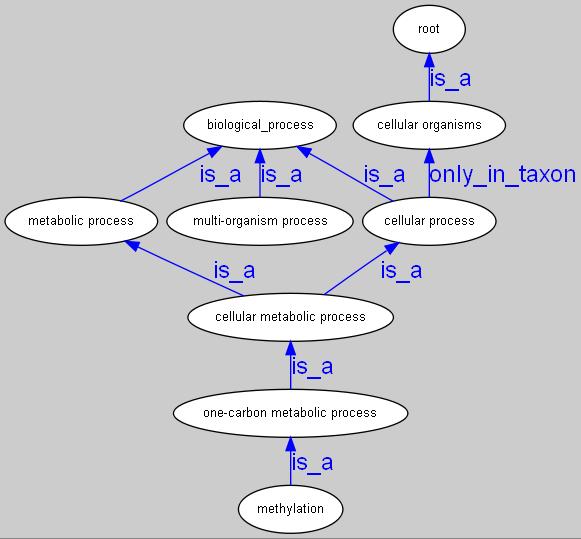