Between 3 March and 5 June 2014, the UniProt-GOA project provided the GO Consortium with 3 annotation file releases, including non-redundant sets of GO annotations to 13 specific proteomes, as well as data releases for annotations of all proteins in UniProtKB. 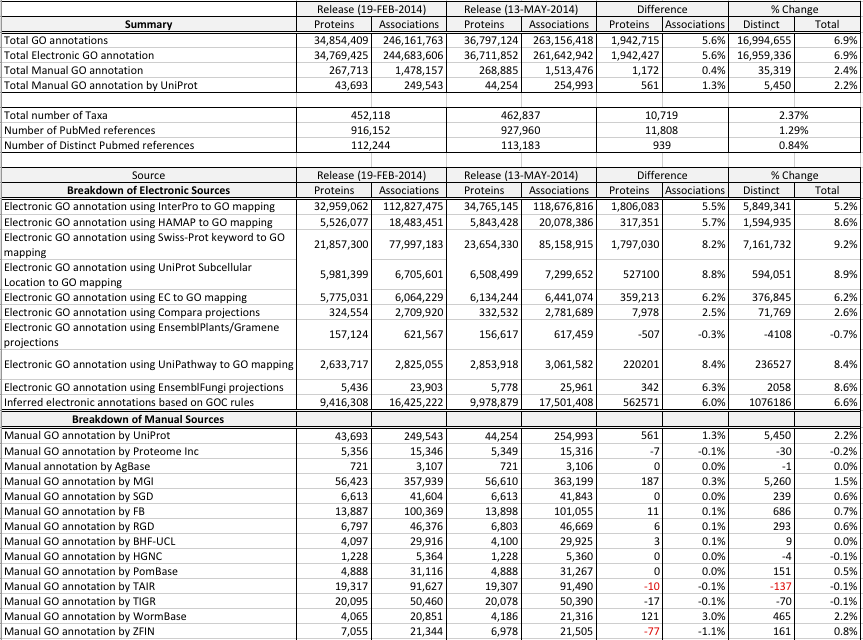 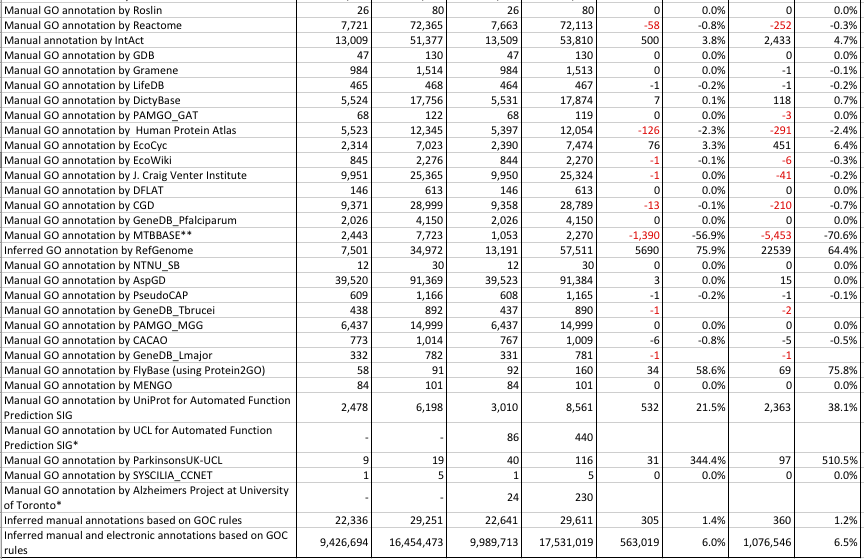 *New sources of annotation after March 2014

**Decrease in MTBbase annotations due to a large number of UniProt accessions becoming secondary, manual intervention is in progress to rectify this.

In May 2013 the UniProt-EBI curators initiated the annotation of a list of approximately 400 human proteins that are targets of the Critical Assessment of Functional Annotation (CAFA) competition. We are curating the primary functions and processes of these proteins in order to populate these targets with functional annotations, which will assist in the assessment of the CAFA competition. We have now completed this annotation project, in total we have curated 4067 proteins with 12,293 annotations. Of these, 384 proteins are suitable for CAFA assessment on Molecular Function or Biological Process terms. "Suitable" means that the protein has at least one new annotation (with evidence code IDA, IMP, IGI, IEP or IPI) in MF or BP that is not the same as any existing manual annotations.

The UniProt-EBI curators continue to annotate proteins that are experimentally determined to be located in the extracellular vesicular exosome. We have identified approximately 2,500 proteins using data from the Exocarta database and a subset of these have been annotated as part of the CAFA project detailed above. We will progress by identifying groups of related proteins, e.g. keratins, immune-related proteins, to form discrete annotation projects.

The following has been accepted for publication:

We continue to include quality control checks within the Protein2GO interface as requested by users or in response to guidelines from the GO Consortium. These have included the ability for each curator to view deleted annotations from all sources and flagging annotations that violate taxon constraints.

Protein2GO is currently being developed to support annotation to entities other than proteins, such as protein complexes (using IntAct Complex IDs) and RNAs (using RNA Central IDs). Tony Sawford is responsible for the development and maintenance of Protein2GO and the UniProt-GOA database.

Annotation files are released every 4 weeks by UniProt-GOA at EBI.

1. We are now incorporating manual annotations from the Alzheimer's Project at the University of Toronto. Sejal Patel, an MSc student from the University of Toronto, is focusing on curating genes associated with Alzheimer’s disease that have been significant in previous genome wide association studies. For further information on this project, a brief project plan can be found at http://wiki.geneontology.org/index.php/Alzheimer%27s_Disease_Annotation_Project