All curators from the different UniProtKB teams (both based at the EBI and SIB) use the web-based Protein2GO editor maintained and developed by the UniProtKB-GOA team.

Currently the curators from the GOA and BHF-UCL projects have together completely annotated 76% of supplied human Reference Genome Targets.

Changes to the contents of the UniProtKB GO annotation file between September 2010 and May 2011: 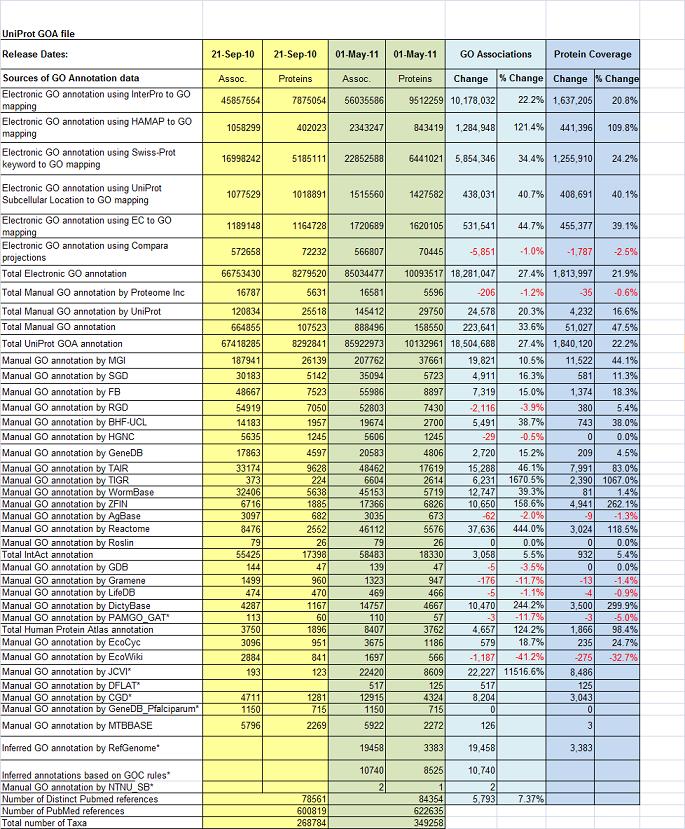 N.B. 1. starred sources indicate those new to the file in the specified period.

2. Changes to annotations reflect the increasing number of QC checks, including RegExps checking for the correct format of identifiers contributed from external annotation groups and present in column 8 ('with')

3. Additional annotations from external groups were increased due to improved integration of annotations whose reference can be mapped to a publicly-described GO_REF reference.

4. HAMAP2GO. Current issues with this pipeline have caused this method to over-predict annotations to unexpected species. Errors in this pipeline are being investigated

UniProtKB provides IEA annotations using the following methods that use information extracted from UniProtKB, InterPro, the GO ontology and Ensembl:

1: mapping tables created and maintained by the UniProtKB group

The table showing the species prioritised for annotation is displayed below. This is in addition to the annotation projects involving animal toxins, submissions, proteins with 3D structures, enzymes, post-translational modifications. A number of these projects have required substantial work into developing appropriate GO Terms. 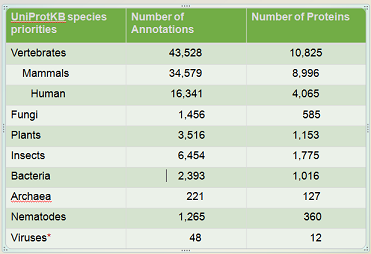 The curators in the UniProtKB-GOA team continue to put emphasis on the annotation of those genes selected for the Reference Genome Project, user-feedback as well as annotations for the grant deliverables from British Heart Foundation and Kidney Research UK funding.

c. Presentations including Talks and Tutorials and Teaching

10th May 2011 GO annotation presentation at an InterPro tutorial, EBI(Rachael)

Creation of a new external2GO mapping file that uses the UniPathway resource is requiring GO content development effort as currently 366 UniPathway terms do not have an equivalent in GO e.g. palmatine biosynthesis

The development of new terms relating to aspects of kidney development is ongoing with the creation of a further 23 terms created earlier this year bringing the total number of kidney development terms to 470 (from 446 last year). This represents ~1.4% of all the current terms in the Gene Ontology. The total list of terms can viewed at [1]. Also there were improvements made to renal physiology terms describing diuresis and natriuresis in response to a SourceForge request made by Cynthia Smith [2]. This was done in close collaboration with renal experts via a webex conference call and a face-to-face meeting with them. It was decided to delete the existing terms diuresis ; GO:0030146 The process of renal water excretion and natriuresis ; GO:0030147 The process of renal sodium excretion and to replace them with positive regulation of urine volume ; GO:NEW to describe diuresis and positive regulation of renal sodium excretion ; GO:NEW to describe natriuresis. Further details can be found at [3].

dictyBase Curators manually annotating to GO in the dictyBase group have been moved across to using UniProtKB's GO curation tool: Protein2GO. UniProtKB-GOA will generate a gene association file for Dictyostellium that dictyBase will modify and enhance for their user community.

NTNU - Trondheim, Norwegian University of Science and Technology Annotations to gastrin genes submitted by the systems biology group at NTNU

APO-SYS Work carried out with the Apo-Sys EU Consortium, with a view to improving the annotations available for proteins involved in the apoptotic pathways.

Yasmin has presented the Renal GOA Initiative at the EBI's Industry Ontology and Engineering Workshop in October 2010 and at the Syskid Consortium Meeting in January 2011 held in Innsbruck. A poster was also presented at the KRUK Fellows Day in September 2010. The progress of the Renal Initiative has been reported to the Scientific Advisory Panel and members of the renal community in 3 quarterly newsletters (October 2010, January 2011 and April 2011, currently visible at [4]). The KRUK target list has increased to 2359 genes/proteins which includes human, mouse and canine orthologues. Annotation has been ongoing for priority target genes involved in kidney development, podocyte function, Loop of Henle and a list of target canine kidney genes showing diferential expression in reponse to neuropilin (provided by Prof Herbert Shramekar from Innsbruck). Annotation of the list of target genes provided by the GUDMAP Consortium with no GO annotation has been completed. Yasmin has been closely involved with curators, ontology editors and new field experts on development of the insect and xenopus related kidney development GO terms. Organized and attended a webex meeting with renal experts to discuss aspects of renal physiology relating to diuresis and natriuresis. An interim grant report was written and submitted to KRUK in October 2010. Yasmin has been involved in answering various goa help emails. Also been involved in the apoptosis target gene annotation and various associated phone conference meetings. She has also been working on manuscripts with Ruth Lovering and David Hill.

The GOA group continues to provide groups in the GO Consortium with checks of the UniProtKB accessions applied in gp2protein mapping files. Annotation groups receive an email to indicate where in their file a secondary or deleted UniProtKB has been used. This email also (where possible) indicates suitable replacement UniProtKB accessions. Such checks are run and results emailed to annotation groups on the first of each month.

The browser continues to be developed:

UniProtKB-GOA now incorporates annotations from external groups that use a GO reference (GO_REF) or a MOD-specific reference that can be converted to an equivalent GO_REF using the mappings defined in http://www.geneontology.org/doc/GO.references in their reference field. Previously, UniProtKB-GOA only accepted annotations that used a PubMed identifier in this field.

An example of a GO_REF that we are now accepting is GO_REF:0000015 'Use of the 'No biological data' (ND) evidence code for Gene Ontology terms'. A description and complete list of the GO_REFs available can be found at http://www.geneontology.org/cgi-bin/references.cgi.

Over the last month we have been working to provide a more complete display of the manual annotations that we integrate into the UniProtKB-GOA dataset from external annotation groups. Whereas previously the 'with' field (column 8) in our annotation file was left empty if a manual annotation did not include either UniProtKB or GO identifier, our files now displays 43 different gene, protein and chemical identifier types (such as WormBase, CHEBI and EcoCyc identifiers) in this field. This development ensures that integrated manual GO annotations display with the full set of information that curation groups have used when translating experimental data into a GO annotation.

We are pleased to announce an additional set of GO annotations available in this release that have been automatically generated from the Molecular Function (MF) -> Biological Process (BP) inter-ontology relationships present in the GO OBO v1.2 format.

As many GO users do not currently reason over the GO inter-ontology relationships, a set of inferred annotations has been generated to improve the consistency of the Biological Process annotation set. These GO annotations are produced when an annotation has been made (either manually or electronically) to a Molecular Function term that, either directly or via one of its parent terms, has a relationship to a Biological Process term and where the Process term (or one of its children) has not already been used in the annotation set for the same gene product identifier. This inferred annotation set applies the same gene product identifier, reference and evidence code as the asserted function annotation and are generated from all sources of GO annotations, with only 'NOT'-qualified annotations being excluded. All such inferred GO annotations can be identified by the 'GOC' value in the 'assigned_by' field (column 15).

A UniPathway2GO mapping file being developed in collaboration with Anne Morgat.