Annotations to Catalytic activity with IPI

Annotations to Catalytic activity and its child terms using IPI

The IPI (Inferred from Physical Interaction) evidence code, is used where an annotation can be supported from interaction evidence between the gene product of interest and another molecule (see evidence code documentation: http://www.geneontology.org/GO.evidence.shtml#ipi). While the IPI evidence code is frequently used to support annotations to terms that are children of GO:0005488; binding, it is thought unlikely by the Binding WG that enough information can be obtained from a binding interaction to support an annotation to a term that is a chid of GO:0003824; catalytic activity. Such IPI annotations to child terms of GO:0003824 may need to be revisited and corrected.
Many groups have already agreed that such annotations should not be valid. SGD has 88 such annotations and we wanted to examine them before agreeing to make this a hard rule.


Here are our findings:

There are some two subunit complexes where one subunit is catalytic but functions in a complex of at least two subunits where a second subunit is responsible for substrate targeting. Without the specificity subunit, the catalytic activity is absent or severely impaired. All of the annotations in question are for the substrate specificity subunits. As currently defined, annotations of "contributes_to" the following catalytic activity terms by IPI is one of the contributing lines of evidence that led researchers to make the conclusion that each of the genes listed below is involved in the catalytic activity. Other lines of evidence included IMP, IGI, and/or ISS. No single line of evidence is individually sufficient; it is the combination that leads the researchers to make the conclusion that the annotation represents.

So while we agree that IPI cannot be the sole evidence to support an annotation to a catalytic term, we feel that annotations IPI can be used with other lines of evidence to represent the literature accurately. 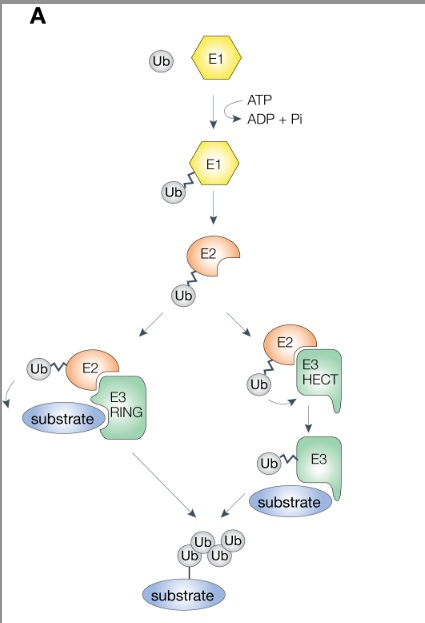 For substrate specificity subunits in general, possibly there is an ontology change that would better represent what is going on. We'll use the E2/E3 ubiquitin ligases as the example. There are two completely different type of E3's (see attached figure).

In one type (E3 HECT) there is a single gene product that both recognizes (binds) the substrate and catalyzes the reaction. In the second type (E2/E3 RING complex), the catalysis and substrate binding activities are present in separate gene products. It might be a more accurate representation of what is going on to create new terms to represent the two distinct parts that are involved in this reaction, the catalytic transfer and the substrate recognition/binding, where the term representing the complete activity would have has_part relationships to each of these two new terms.