Currently the curators from the GOA and BHF-UCL projects have together completely annotated 77.5% (609/785) of supplied Reference Genome Targets. 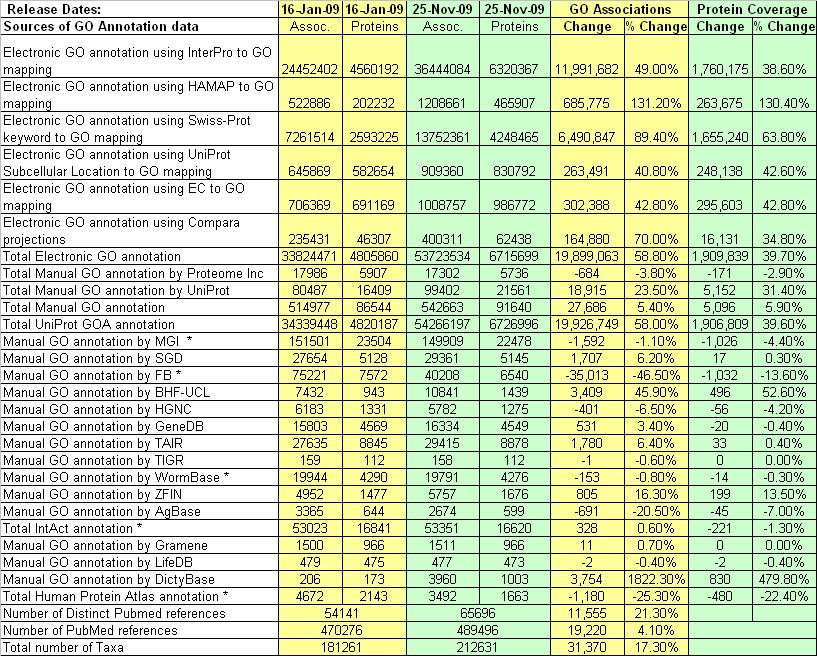 Because of the multi-species nature of the UniProtKB, GOA is able to assist in the GO curation (by both manual and electronic means) of proteins from over 205,000 taxonomic groups. However GOA curators are also primarily responsible for supplying the GO Consortium with manual and electronic GO annotations to the human proteome.

GOA curators do not only manually annotate, but also coordinate and check the integration of manual GO annotations from other curation efforts at the EBI (including from InterPro, IntAct and UniProtKB groups).

October 2009 gene_association.goa_pdb file needed to be changed in October, as GOA was no longer able to provide annotations to specific PDB chains. Annotations in this file now only associate PDB entries with GO terms. As an example, an annotation line in the PDB file has changed from:

GOA, PDBe and InterPro are working together to provide a new file in the 2010, which will once again provide chain identifiers for PDB entries. This new file should hopefully provide an improved set of annotations from InterPro2GO, as well as include manual annotations where the PDB chain is identical to 80% of a UniProtKB accession.

The name and format of this human file has remained the same, however annotations are now assigned to proteins from just the 'UniProtKB' (column 1) database source. Human IPI identifiers continue to be included in column 11 of annotations.

In addition, new releases of the cross-references file for human IPI set (human.xrefs.gz), will no longer be provided. Instead, identifier mapping is possible using the UniProt ID mapping file, available from: ftp://ftp.ebi.ac.uk/pub/databases/uniprot/current_release/knowledgebase/idmapping/idmapping.dat.gz

idmapping.dat.gz is a tab-delimited table, which includes mappings for 20 different sequence identifier types, including IPI identifiers.