We continue to prioritise the annotation of those genes selected for the Reference Genome Project.

Proteins associated with kidney development and disease are the focus of the UniProtKB-GOA Renal Annotation Initiative, which is headed by Dr. Yasmin Alam-Faruque.

Currently the curators from the UniProtKB-GOA and BHF-UCL projects have together completely annotated 65% (721/1111) of supplied Reference Genome Targets. 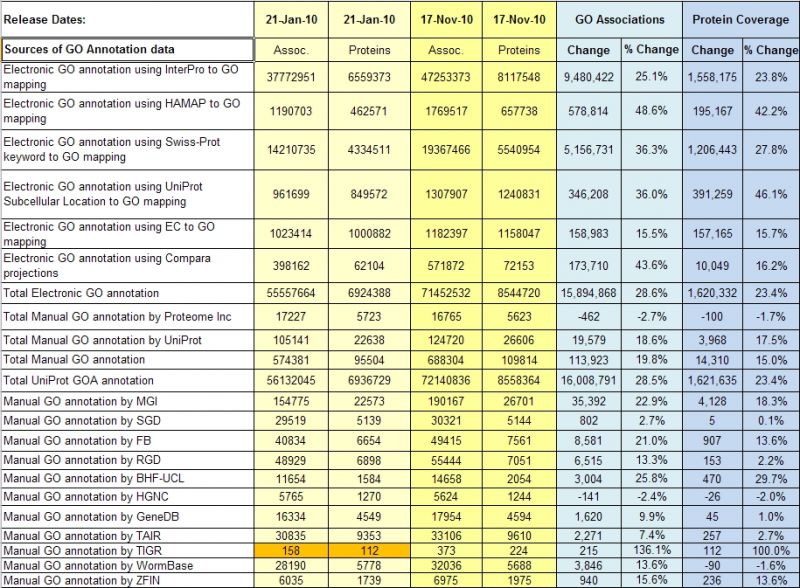 The two cells in orange are the TIGR statistics from UniProtKB-GOA's December 2009 release as these were temporarily missing from the January 2010 release.

* New sources of annotation after January 2010

1: mapping tables created and maintained by the UniProtKB-GOA group

Following the extensive redevelopment of QuickGO (http://www.ebi.ac.uk/QuickGO) in 2008, the user interface of QuickGO was, this year, substantially improved. The main improvements are;

The statistics section of QuickGO has also been improved with the addition of statistics both for counts of annotations and for counts of proteins. These are now available for download in a text file format, which will enable users to create graphical representations of the statistical data for use in publications, e.g. a bar graph for the number of proteins in a given list annotated to GO terms present in a GO slim, which will provide an overview of the biological attributes of the list of proteins.

The UniProtKB-GOA renal project, under the direction of Yasmin Alam-Faruque, has been very successful to date providing 1014 proteins with 9711 manual annotations. As a consequence of early annotation efforts of genes expressed in the Loop of Henle, it became apparent that there was a lack of GO terms describing the many aspects of kidney development. To address this, a kidney ontology development workshop was hosted by UniProtKB-GOA in January. As a result of this meeting, over 445 new GO terms were created (representing approximately 1.4% of the total number of terms in the Gene Ontology). The new terms were largely Biological Process terms and detailed not only the anatomical description (nephron, collecting duct, stroma, renal capsule, kidney vasculature, pattern specification and Malpighian tubule development) but also the biological processes (cell differentiation, signaling pathways, growth, morphogenic processes and regulatory processes) that contribute to renal development. The terms represent development of the various renal systems across organisms i.e. metanephros (mammalian; 129 terms); pronephros (amphibian; 24 terms); mesonephros (fish; 102 terms) and renal system/Malpighian tubule (insect; 18 terms). A publication is currently in progress outlining this significant development in the Gene Ontology.

Following the ontology workshop, further species-specific experts have been recruited to assist with representing the correct anatomical structures within Xenopus and fly to describe renal system development within amphibians and insects.

The success of this project so far has highlighted the benefits of collaboration with the research community. Further annotation targets were suggested by the Edinburgh team of the GUDMAP Consortium and, as a result of this, GO annotation is almost complete for a list of 117 mouse gene products expressed in the urogenital system that were previously lacking any GO annotation.

Yasmin Alam-Faruque and Emily Dimmer are advisors to the SysKid project, a member of which has provided a list of 108 kidney-related proteins which are differentially expressed in response to overexpression of neuropilins. This list of gene products is also poorly represented by GO annotation and focused curation to this list is ongoing.

Several new quality checks have been incorporated both into our database and into the UniProtKB-GOA curation tool Protein2GO during 2010. A summary of these is as follows;

1. To avoid processing problems for GO Consortium tools we changed the contents of column 1 in the GOA-UniProt gene association file. Column 1 was originally displaying the values 'UniProtKB/TrEMBL' or 'UniProtKB/Swiss-Prot' to indicate which section of UniProtKB an accession is a member . This information is now provided in a tab-separated, supplementary gene product information file (gp_information file can be found here; ftp://ftp.ebi.ac.uk/pub/databases/GO/goa/UNIPROT/) that is released alongside the GOA-UniProt gene association files (for more information on this file see the readme; ftp://ftp.ebi.ac.uk/pub/databases/GO/goa/UNIPROT/gp_information_readme). Column 1 of our UniProt GAF has changed to consistently display 'UniProtKB' for all UniProtKB accessions.

3. New PDB gene association file. This file has been generated from a collaboration between the InterPro, PDB and UniProtKB-GOA teams, and once again is able to offer annotations to PDB chain identifiers. In addition, further sources of GO annotations are now associated with PDB chains, to provide a more comprehensive PDB GO annotation resource. Manual and electronic GO annotations are now provided in this file from two sources:

a. where an InterPro entry matches a PDB chain, annotations supplied by the InterPro2GO electronic method are assigned to the chain identifier (for further details on this method see: http://www.geneontology.org/cgi-bin/references.cgi#GO_REF:0000002).

UniProtKB-GOA gene association files changed to correctly attribute the InterPro group as the source of annotations generated by the InterPro2GO electronic annotation pipeline. This means that the value in column 15 (Assigned_By) has changed from 'UniProtKB' to 'InterPro' where column 6 (DB:Reference) displays the reference 'GO_REF:0000002'.

3. The contents of column 1 (DB) of all UniProtKB-GOA gene association files has changed in this release, so that UniProtKB accession numbers are only identified by the namespace 'UniProtKB' instead of the previous values of either: 'UniProtKB/TrEMBL' or 'UniProtKB/Swiss-Prot'. This change has occurred in response to requests from GO tool providers. However the new gp_information.goa_uniprot.gz file described above does contain the UniProtKB subset (Swiss-Prot/TrEMBL) information in column 2 for all UniProtKB proteins that have been GO annotated.

UniProtKB-GOA gene association files started to include manual annotations from the GO Consortium Reference Genome project. GO terms based on experimental data from the scientific literature are used to annotate ancestral genes in phylogenetic trees from the PANTHER database (http://www.pantherdb.org) by sequence similarity (evidence code ISS), and unannotated descendants of these ancestral genes are inferred to have inherited these same GO annotations by descent.

The proteome sets provided by UniProtKB-GOA were historically based on those defined by the Integr8 project. Integr8 is planning to close after the launch of Ensembl Genomes as the next-generation interface for genome-scale data from non-vertebrate species. UniProtKB is taking over responsibility for the maintenance of the complete proteome sets, which can be found here: http://www.uniprot.org/taxonomy/complete-proteomes. UniProtKB-GOA have started to use the UniProtKB proteome sets to produce the proteomes gene association files.

There are two main consequences of this that should be noted:

1) The proteomes are available only for those species that have a complete genome, as defined by INSDC. For the complete genomes, please see http://www.ebi.ac.uk/genomes and the NCBI Project database, http://www.ncbi.nlm.nih.gov/sites/entrez?db=genomeprjh

2) The entries within the proteome are the direct translation of the sequenced reference genome; this logic is applied to all species. Any species-specific rules that Integr8 used have not been propagated to the new sets. The proteome sets will be subsets of the GOA-UniProt gene association file, and consequently if a protein accession is deemed not to be present in a particular proteome then any manual annotations made to this protein will not be visible in the proteome set; they will, however, still be available from the GOA-UniProt gene association file.