The UniProt GO Annotation project (UniProtGOA) has been a member of the GO Consortium since 2001. All UniProt curators are actively involved in curating UniProtKB entries with Gene Ontology terms during the UniProt literature curation process, providing both high-quality manual GO annotations in addition to their contributions to electronic GO annotation pipelines. The multi-species nature of UniProtKB means that the GO Annotation project is able to assist in the GO curation of proteins from over 430,000 taxonomic groups.

The core UniProt-GOA project staff are primarily responsible for supplying the GO Consortium with manual and electronic GO annotations to the human proteome. UniProt-GOA staff not only create manual annotations, but coordinate and check the integration of GO annotations from other curation efforts at the EBI (including from InterPro, IntAct and Reactome). The UniProt-GOA dataset is supplemented with manual annotations from 35 annotating groups, including all members of the GO Consortium, as well as a number of external groups which produce relevant functional data. Nine electronic annotation pipelines are incorporated into the UniProt-GOA dataset, which provide the vast majority of annotations for non-model organism species. UniProt-GOA is therefore able to consolidate multiple sources of specialised knowledge, ensuring the UniProt-GOA resource remains a key up-to-date reference for a large number of research communities.

11 annotation files were released by the GOA project between January 2014 and November 2014. These included non-redundant sets of GO annotations to 13 specific proteomes as well as data releases for annotations of all proteins in UniProtKB. 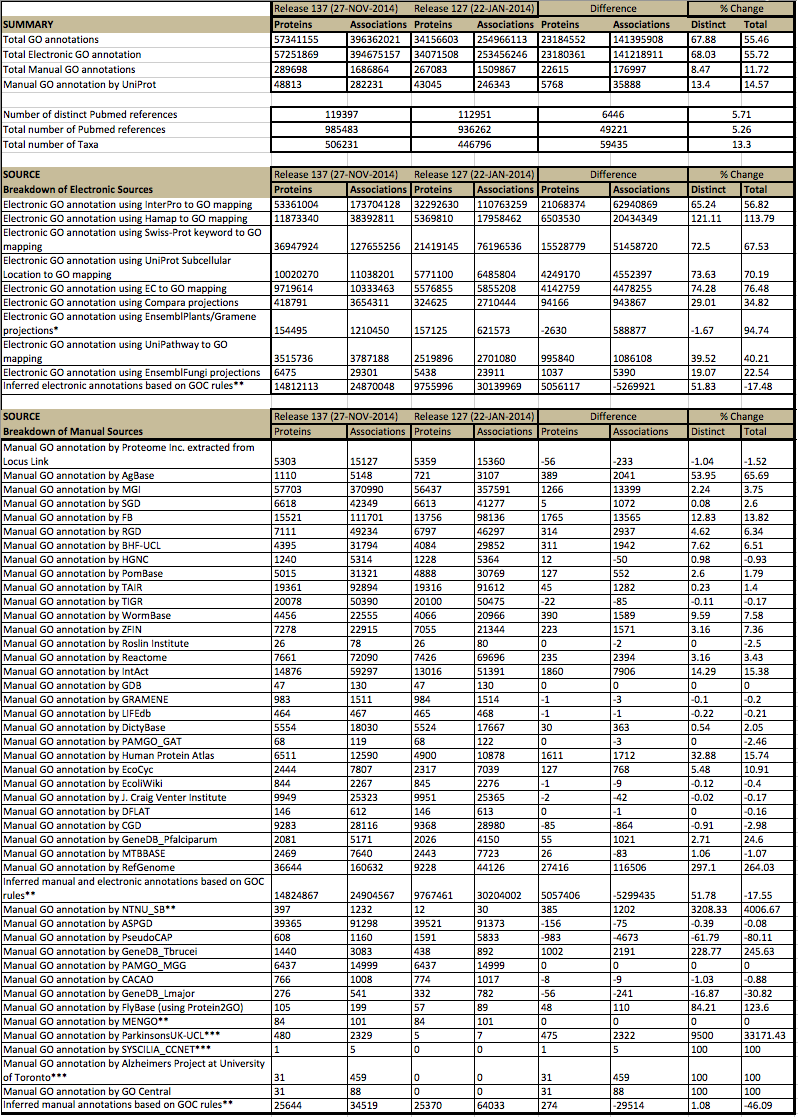 ** Reduction in the number of annotations that are assigned by 'GOC' due to further improvements to the pipeline that creates the GO Consortium 'inferred' annotations to reduce redundancy.

***New sources of annotation after January 2014

During 2014 we continued annotating proteins that are experimentally determined to be located in the extracellular vesicular exosome using annotation extensions to capture contextual information for each protein.

We completed annotating a list of approximately 400 human proteins that are targets of the Critical Assessment of Functional Annotation (CAFA) competition. We curated the primary functions and processes of these proteins in order to populate these targets with functional annotations, which assisted in the assessment of the CAFA competition.

4. Annotation corrections based on quality control reports (all curators)

Work to improve the QuickGO user interface has continued throughout 2014. This work also involves extending the range of features currently provided by QuickGO.

As more GO Consortium curation groups migrate their annotations into the UniProt database and move to using Protein2GO as their sole curation tool for protein GO annotation, we continue to add more functionality to the tool.

Protein2GO now has an ‘Author Contact’ feature. This allows curators to email corresponding authors after they have curated their paper. The emails are sent out at release time and invite authors to view annotations created from their publication; inviting their feedback should they have any. Since the introduction of this feature, we have received positive emails from authors regarding the annotations created and the useful of GO in capturing information from their publications.

All annotation files that we provide, in both GAF and GPAD format, now contain a GO-version tag in their header which gives the IRI of the version of the GO that was current when the files were published, for example:

This allows consumers of our annotation files to link a specific set of annotations to a specific version of the ontology.

We now incorporate GO annotations to IntAct Complex Portal identifiers. The IntAct Complex Portal (http://www.ebi.ac.uk/intact/complex/) is a manually curated resource of macromolecular complexes. These annotations are currently visible in our annotation files, except those that are based on UniProt reference proteomes as these contain annotations only to UniProtKB entries. The annotations are not visible in the current version of QuickGO (www.ebi.ac.uk/QuickGO), but will be available from the new version, which is due for release in the near future.

We have improved the accuracy of automatic annotations by removing those annotations that violate taxon constraints. Some GO terms are applicable only to certain taxa and this is encoded in the GO taxon constraints. For example, if a GO term that is valid for use only with eukaryotes, e.g. GO:0000165 'MAPK cascade', is applied to a bacterial protein, the annotation would be incorrect and it would be deleted. This process resulted in the deletion of approximately 106,000 incorrect electronic annotations.

We are now incorporating manual annotations from the Alzheimer's Project at the University of Toronto. Further information on this project can be found at http://wiki.geneontology.org/index.php/Alzheimer%27s_Disease_Annotation_Project,

We made further improvements to the pipeline that creates the GO Consortium 'inferred' annotations to reduce redundancy. This has caused a large decrease in the number of annotations that are assigned by 'GOC'.

Since the beginning of 2014 January we have included annotations from a new project "Parkinson's UK-UCL", which is a project led by Dr. Ruth Lovering at University College London to annotate proteins involved in Parkinson's disease. Further information on this project can be found at http://www.ucl.ac.uk/cardiovasculargeneontology/cardiovascular/newsletters

We have suspended submission to the GO Consortium (GOC) of species-specific Gene Association Files if another group is responsible for the provision of GO annotations to that species. The following files were affected:

As of the UniProt-GOA release in February 2014, we will remove all of the archived species-specific files mentioned above from the GOC CVS repository. These archived files will still be available from ftp://ftp.ebi.ac.uk/pub/databases/GO/goa/old/

We noted a substantial increase in GO Consortium 'inferred' annotations. These annotations are automatically created based on inter-ontology links between Molecular Function and Biological Process terms and between Biological Process and Cellular Component terms. The increase is due to enhancements to the pipeline to take account of the GO hierarchy.

The UniProt-GOA gene association files now include manual annotations for Trypanosoma brucei and Leishmania major that have been created by the GeneDB project. Details of GeneDB can be found at: http://www.genedb.org/Homepage