Need to decide what we mean by 'transmembrane transport' and whether we can assume that most/all transporters are acting across a membrane.

Need to look at both transport and transporter terms.

Chris has committed changes to fix the intersections of the transmembrane terms that were lacking a 'transmembrane' genus.

There's been email discussion (see email thread: process start and end location relations) about adding generic export and import terms. What would be the differentia for these?

For transport, need to make it clear that it's the cargo and not the transporters that are changing location. E.g. for actin filaments, the actin filament itself isn't being transported, but the cargo is being moved along the filament. 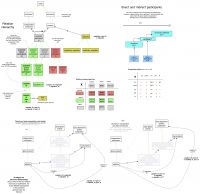 AI: Keep the default relationship (can be used retrospectively) as 'actively involved in process' but change label to: HAS_ACTIVE_ROLE_IN_PROCESS/FUNCTION.