The aim of this project is to overhaul all the terms related to apoptosis in GO, mainly processes. Term phrasing and tree structures will be standardized, and new terms will be added with the aim of giving a broad coverage for all applicable species.

APO-SYS is an EU-funded consortium of 23 partners, aiming at obtaining major progress in comprehension of apoptosis (and more generally cell death) in human diseases, by combining a series of systems biology approaches.

APO-SYS are funding a 9 month position at the EBI for a curator to improve the apoptosis term in GO and annotate papers to apoptotic GO terms, with recruitment beginning as soon as possible.

Apoptosis GO terms were discussed by members of the APO-SYS consortium at a meeting in Stockholm in 2009. The presentation is here: [1]

ISSUES AND IDEAS IN PROGRESS 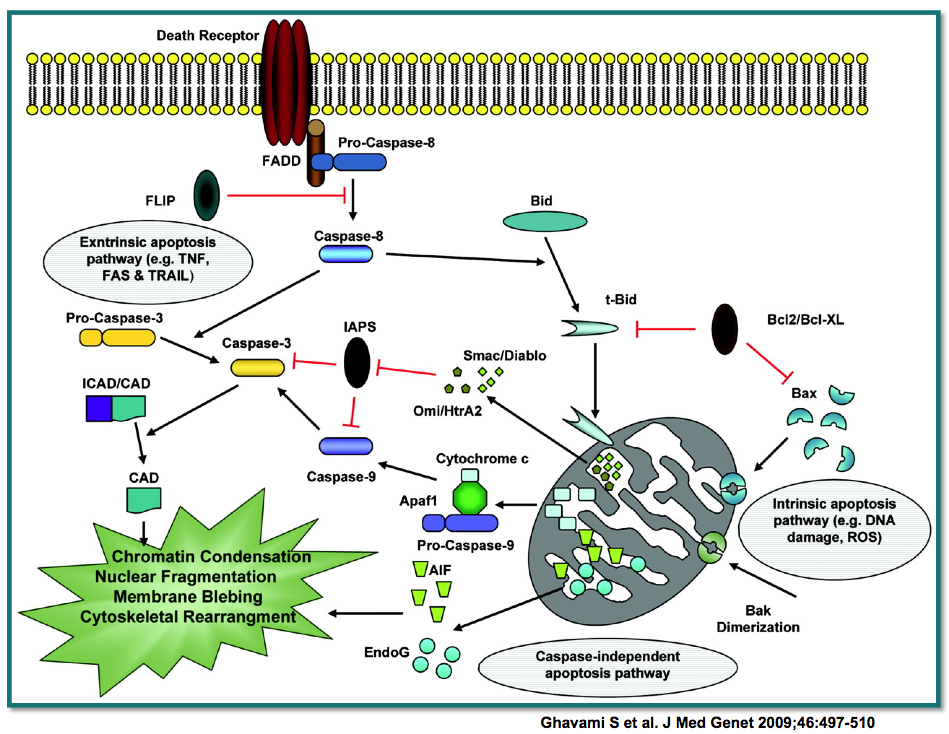 A form of programmed cell death that: 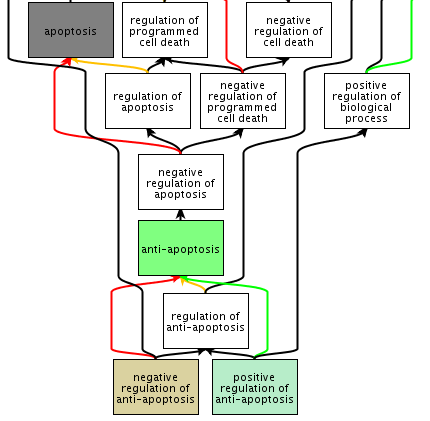 To visualise these ideas, see Paola's presentation from the apoptosis call on May 12th 2011: [6].

An apoptosis working group will be set up to discuss apoptosis in GO and the related problems.

Members of the apoptosis working group will be:

Minutes of the content meeting are in the discussion part of this page.

• Change ‘induction of apoptosis by hormones’ to hormone-mediated signaling pathway

• Email Zhivotovsky lab. Mitochondrial pores – what is released? Does it depend on size of solutes or are certain molecules released?

• Include in email to Zhivotovsky lab: ‘mitochondrial fragmentation’ can we put as a morphological change of apoptosis instead of a sub-process of apoptotic process?

• Contact yeast groups to check if yeast have apoptosomes

• Bring up at an annotation call: ‘protein complex assembly’ and the role of the components in assembly

• GI: Need to check whether ‘Phosphatidylserine exposure on apoptotic cell surface’ this is a terminal event or whether the cell can recover after this

A call was held with GO curators, editors and apoptosis experts to highlight what needs to be done at the Apoptosis workshop in June.

The presentation Paola gave at the call can be found here [9].

Minutes of the call are in the discussion part of this page.

A call was held with GO curators, editors and apoptosis experts to follow-up on work done at the Apoptosis workshop in June.

The presentation that was referred to during the call can be found here File:Apoptosis call 20 07 2011.pdf.

Minutes of the call are in the discussion part of this wiki.

The experts were asked to have an additional content meeting in the EBI, Hinxton, at some point around October-November; but the idea was finally dismissed due to incompatibility of agendas. In its place, it was decided that a document hoding requests and updates would be periodically exchanged between the experts and the GO annotation and editorial teams.

A QuickGO chart view of the main structure of apoptosis terms currently in the GO (February 2011).